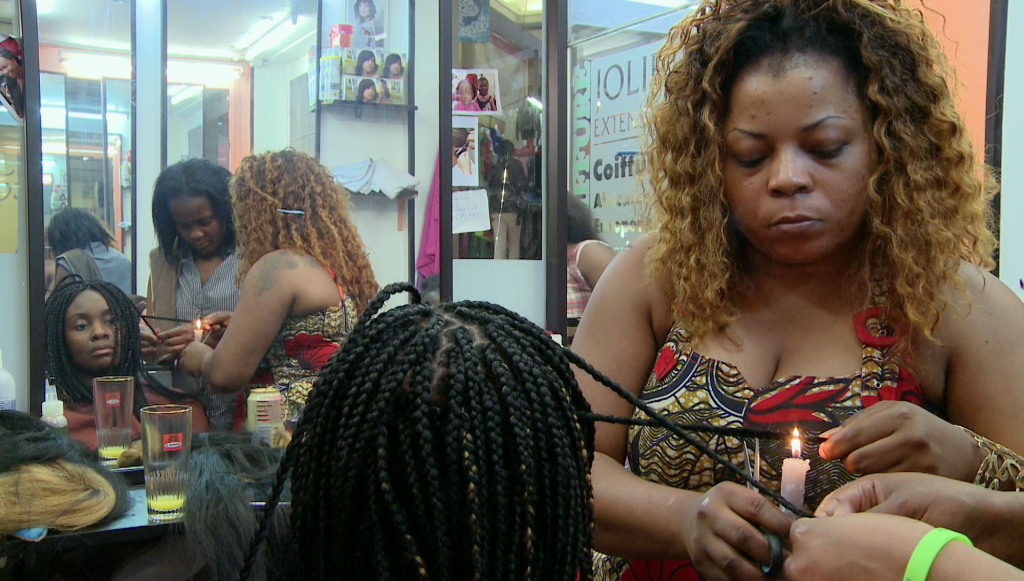 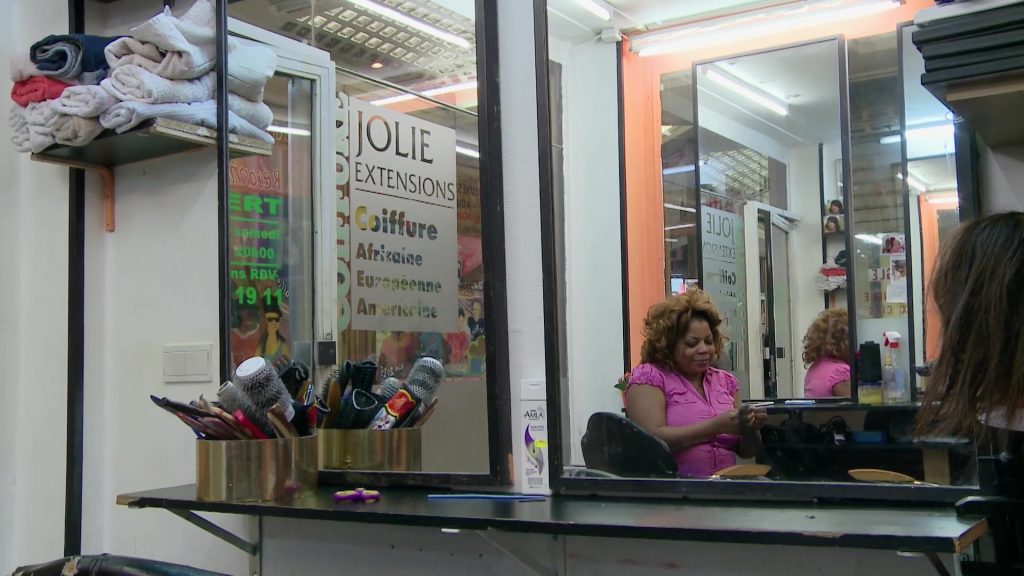 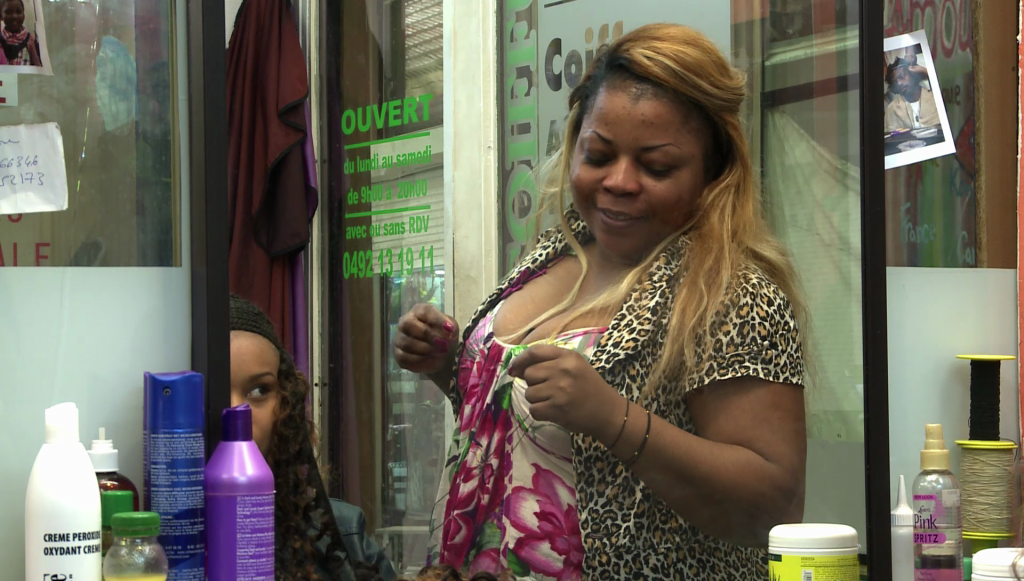 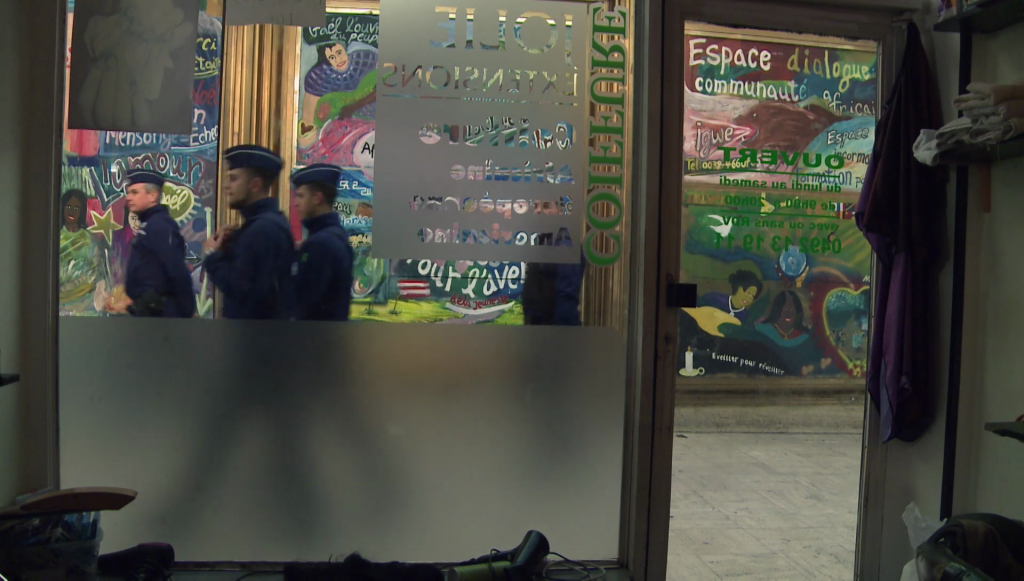 Illegal self-employment in the European capital: In an intimate portrait, Rosine Mbakam’s “Chez Jolie Coiffure” shows the everyday work of Sabine Amiyeme, a Cameroonian who has been living in Belgium for seven years and whose hairdresser’s shop in the middle of Matongé, regularly visited by police checks, is both a refuge and a fascination for Western tourists.

If the host country does not grant an official residence permit, there is often just one option left: staying illegally. Chez Jolie Coiffure / At Jolie Coiffure paints an intimate portrait of Sabine Amiyeme’s day-to-day work. Despite her illegal stay, she runs a hairdressing salon in Brussels. Mbakam’s handheld camera is always there, documenting the hustle and bustle in the tiny shop without intervening herself. Shot on an 8m² with numerous mirrors, an intimate portrait of a microcosm is drawn, the outside of which becomes tangible only through the stories told within.

Sabine Amiyeme left Cameroon seven years ago to work as a housemaid in Lebanon. When she was deprived of her passport there and exploited under unfair working conditions, Sabine fled via Syria, Turkey and Greece to Belgium, where she resumed her old job as a hairdresser in the Matongé district. Since then she still runs her tiny shop without a legal residence permit – even after seven years she is still being denied official papers. Despite the fear of the regular raids by the immigration authorities, there is relaxation and openness inside the beauty shop. Sabine is entrusted with escape stories as well as everyday love and family skirmishes. But Matongé has also recently been “haunted” by other visitors: city tours allow tourists to pass Sabine’s shop and gawk through the windows.

Rosine Mbakam remembers her own incredulity and amazement when she witnessed these strange-looking tours in Matongé.  That was one of the things that moved her to the film project:

“I wanted to portray the uncertainty on one hand, and curiosity on the other, the glances and the separation of two worlds. What can we expect from people who just walk by and watch without ever saying a word to anyone? Those who remain only in their tourist attitude?” (Mbakam 2019)

Eventually, Mbakam came back to give those who were always being observed the opportunity to express themselves and to speak of their often arduous paths and traumas – issues that society often overlooks or represses.

“With this film, we hope to change the view of the neighbourhood and break the condescension.” (Mbakam 2019)

Rosine Mfetgo Mbakam was born in Cameroon in 1980 and started working at the NGO COE where she was trained in editing and directing and made several documentaries. In 2003, she joined the team of STV (Spectrum Television) where she made audiovisual programs. Mbakam left Cameroon to study film at INSAS in Belgium in 2007. In 2018 she founded Tândor Productions, together with Geoffrey Cernaix. (von: Crossing Europe Homepage: https://www.crossingeurope.at/film/chez-jolie-coiffure-at-jolie-coiffure.html )